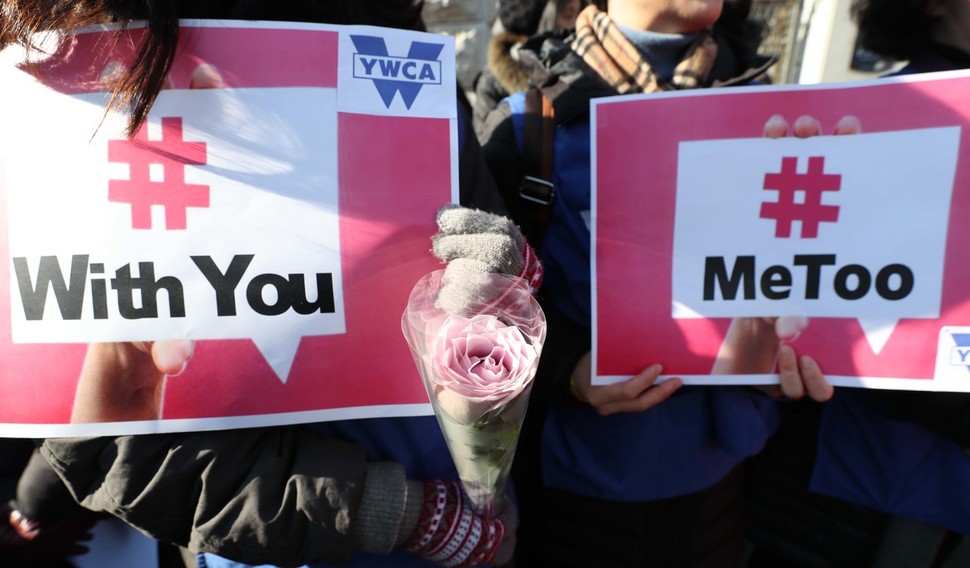 A woman holds a white rose between two signs during a MeToo demonstration in front of the Supreme Prosecutors’ Office in the Seocho district of Seoul on Feb. 1. The white rose is the symbol of the MeToo movement. (by Baek So-ah, staff photographer)
A torrent of “MeToo” accusations is causing deep fissures in some of South Korea’s more regressive cultural practices as it spread from the prosecutors to the culture and arts, academic, press, religious, and business communities. Meanwhile, the outpouring of “With You” messages expressing support for “MeToo” and denouncing the barbaric reality of sexual assault continues to grow. A month into the MeToo movement, many are now saying South Korea is being swept into a wave of major changes that will leave it permanently transformed. The South Korean MeToo movement began with courageous revelations of sexual harassment by Seo Ji-hyeon, a prosecutor in the Tongyeong branch of Changwon District Prosecutors’ Office. On Jan. 29, Seo posted a message on the prosecutors’ ePROS electronic knowledge management system alleging sexual harassment by former bureau director Ahn Tae-geun. Her revelations – which showed that even the prosecutors charged with defending the law and justice were not free from an internal culture of sexual assault – sent shock waves through South Korean society. Having started in the legal world, the MeToo movement soon spread to the culture and arts community with allegations of habitual sexual assault by Yeonhee Street Theatre Troupe artistic director and theater world doyen Lee Youn-taek. The culture of abusing internal authority to perpetrate sexual assault turned out to be deeply rooted and far-reaching. Soon, noted entertainers, including actors Jo Min-ki and Cho Jae-hyun, were also being implicated in accusations of sexual misconduct, and with allegations of sexual assault by Catholic priests, South Korea’s deeply rooted hierarchical structures and cultural sexism were being drawn into the daylight. Today, MeToo has become more than just a movement demanding that its victims accept the risks – it is now a cultural undercurrent transforming practices throughout South Korean society. Some experts have even begun saying the history of South Korean society can divided into two periods: before MeToo and after. In the past, many women alleging sexual victimization were treated as “heretics” threatening organizational order or scorned as “gold diggers.” They often found themselves facing counterattacks of false accusations and defamation. But with Seo’s revelations sparking a growing belief that change is possible, women who felt unable to speak out about their victimization in the past are now coming forward. The difference is that many now feel they can actually realize changes. “Habit may well set in again some time, but the most crucial difference now is the awareness that things can change if you speak out,” said Kim Ji-hyeon, director of the Goyang Sexual Assault Counseling Center. 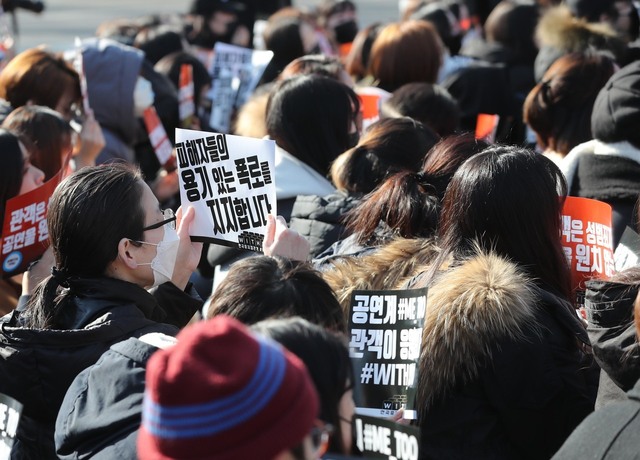 Citizens voice support for women who suffered sexual abuse and harassment in the South Korean theatre community during a MeToo demonstration held at Marronnier Park in the Jongno district of Seoul on Feb. 25. (by Baek So-ah, staff photographer)
Victims’ accusations are now leading to punishment and systemic changes Boosted by solidarity from across society, revelations of victimization that might have been buried quietly in the past are now leading to actual punishments and the dismantling of cultures of authoritarian abuse. Two days after Seo’s revelations, the prosecutors set up an investigation team to look into accusations of sexual misconduct and provide restitution; a sitting chief prosecutor ended up under detention and indictment as a result. Poet Ko Un was previously discussed as a possible Nobel Prize in Literature contender; now some are discussing removing his writings from textbooks. With society at large now listening to the victims, there is a growing confidence that it is finally safe to speak. “At this point, the reason the MeToo movement continues to grow is that we have this confidence in the society – this belief that our revelations will be addressed and won’t just be buried away,” explained Kim Bo-hwa, a supervising researcher at the Korea Sexual Violence Relief Center’s Ulim research institute. Some experts are suggesting that the MeToo movement should take another step forward by shifting its attention and broadening its base. Rather than simply being about allegations of abuse, observers are suggesting, it should function as a mechanism to encourage reflection and reform within society. “Rather than focusing on who alleged what kind of abuse, this should be an occasion to us to reflect on whether we ourselves haven’t been perpetrators or accessories,” said Korea Sexual Violence Relief Center director Lee Mi-gyeong. Revising defamation laws to protect the rights of whistle-blowers Many are also calling for institutional underpinnings to help establish “MeToo” awareness as a practical social norm. Some have mentioned creating social platforms for hearing and addressing victim allegations, as well as amending the current legal system – especially Article 307 of the Criminal Act on “defamation by publicly alleging facts” – to prevent whistle-blowers from facing punishment on defamation charges. Proponents argue that the safeguards are needed to prevent victims from facing a second victimization as the MeToo wave subsides. “Victims remain petrified in an environment where many of the perpetrators are ‘kings’ in the culture and arts communities,” explained one source involved in activities to combat sexual assault in the theater world. “For legal and institutional improvements to show their effects, we need measures to prevent sexual assault perpetrators from setting foot again in the community,” the source added. By Shin Ji-min and Seon Dahm-eun, staff reporters Please direct questions or comments to [english@hani.co.kr]
Prev Koreans divided over reduced working hours Koreans divided over reduced working hours 2018.03.03by KangYeonbae [Photo] Union holds rally in Seoul to save GM Korea jobs Next [Photo] Union holds rally in Seoul to save GM Korea jobs 2018.03.03by KangYeonbae
0