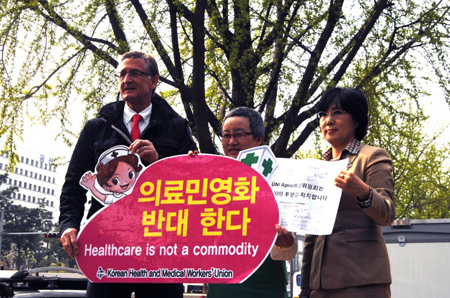 Philip Jennings, left, general secretary of UNI Global Union, joins a protest in Yeouido, Seoul, April 10, against the privatization of medical services. He delivered a speech at the rally with hundreds of members of the Korea Health & Medical Workers' Union. / Courtesy of UNI Global Union

Nearly half of Korean employees regularly work overtime although the nation has adopted the legally-binding 40-hour week system.

Some 620,000 employees labored more than 12 overtime hours during the week plus extra work on weekends in 2012, according to government statistics.

Long working hours and low productivity have been considered chronic problems in Korea Inc., and the government has proposed cutting the maximum work hours from 68 to 52 per week in two years' time.

Achieving this goal of reduction in working hours will certainly be a tough fight.

Businesses are being encouraged by the government to hire more people so that each employee will work fewer hours with a corresponding decrease in earnings.

Workers, however, do not want their incomes to decrease. Companies insist that hiring more employees without cutting wages will be unsustainable for them financially.

Philip Jennings, general secretary of UNI Global Union, said in an interview with The Korea Times that working hours should be shortened, but individual workers shouldn't "pay the bill."

The Nyon, Switzerland-based UNI Global Union represents more than 20 million workers from more than 900 trade unions in some 150 countries. Major Korean labor unions including the Federation of Korean Trade Unions are members of UNI.

"You need to make a new social contract to reduce working hours. But I don't think individuals have to pay the bill," Jennings said.

"In Germany, when we had the global crisis, workers made a decision, ‘We will work fewer hours and see less pay.' But that was a problem of economic cycle. Here, you have systematic problem of working too long. It is not good for competitiveness. A tired worker is not a productive worker."

The union leader linked the need to maintain current wage levels to the bigger issue of growing inequality in Korea.

"When I first came to Korea, roaring Asian Tigers took the cubs, the people, with them. They were growing together. The Tiger is roaring still, but not taking people with them. The economy is growing, but I am not feeling, not seeing this. It's harder to make a living," Jennings said.

"I see the new Seoul, the new Korea. But there are people who feel lonely, abandoned and cannot feed themselves. Korean society should wake up to this reality."

Jennings also discussed seniority-based wages, which are commonly practiced in Korea. The government recently published a guideline which recommends that companies should revise their seniority-based wage structure by adopting performance-based payments or decide wages based on an employee's job and position.

While Jennings found such widespread practice of seniority-based pay in Korea unique, he said the principle of wage systems should be "certainty of what an employee is going to earn."

"If I make decision on what I buy and where I live, I need to know the level of income. Therefore I think this kind of certainty is very important," he said.

"My message to the government will be ‘Be careful on purchasing power on citizens.' An economy is built on consumption, on working people's ability to buy goods and services ... Be very careful with squeezing a dry towel."

Labor unions in Korea have recently been portrayed in a negative light by some politicians and the media as a selfish cohort clinging to their accumulated "privileges," preventing increases in hiring.

Jennings admitted that "labor movements in Asia should do more for irregular workers and women." But he said that accusations against labor unions for being responsible for the stalled job growth are wrong.

"It is all part of the game to weaken labor law and turn it into a jungle where they can do what they want to do," Jennings said.

"Who built pressure cookers on the economy and exploded the pressure cookers? It wasn't the banking unions. It was the philosophy and value of banking managers. CEOs earn over 300 times more than average workers ... The share of wages in the wealth produced in G20 countries is lower now than it has been for the 30 years. Money is going up there."

This year, Korea faces various labor issues to tackle. They include dealing with potential privatization of state-run companies; simplifying the wage structure by integrating regularly paid bonuses and allowances into "normal wages," and cutting work hours.

At stake is also how to boost the percentage of working people against the entire population to over 70 percent; how to have more women participate in the labor market; and how to improve working conditions for non-regular or contract workers.

Besides, the country has to extend the retirement age, deal with labor unions of teachers and civil servants, and solve the high rate of youth unemployment.

When asked to name an issue that caught his attention and suggest a solution, he didn't single out one but urged the government and labor unions to have a dialog.

Jennings visited Seoul to express his concern at deteriorating labor rights since the election of President Park Geun-hye. The last time he visited the country was in 2010.

"Developments since the election of President Park alarmed UNI and the global labor movement," he said.

"The arrest of union leaders. The raid into Korean Confederation of Trade Unions. It's not acceptable that unionists are put into prison for doing their union work."

The general secretary also criticized police presence at the recent protest by medical professionals against a potential privatization of medical services.

"There were nurses. They are taking care of mothers, fathers and families of policemen, yet they stood there. What message do I take to the world when I am back?"